A very quick post this morning before I forget; we have been watching Sky for years now, and at some point over the last year or more, we have been getting audio cut-outs via our Sony Surround sound box.

What would happen is that the sound would cut out for half a second to a second, and then come back a moment later.  If we rewound the programme by a few seconds and tried again, it invariably played ok the second time around… proving that the recording itself was not at fault, but the audio communication to the Surround Sound box — the picture quality was not being impacted during these issues.

END_OF_DOCUMENT_TOKEN_TO_BE_REPLACED

I recently found this info useful from this link, when I was repurposing an old disk for a temporary and experimental installation of windows.

To manually wipe a drive and convert it to GPT:

END_OF_DOCUMENT_TOKEN_TO_BE_REPLACED

I recently needed to install a fresh copy of Windows 10 Pro on my main machine; and have been appalled at how many apps are installed that seem to want to sell you things; like ‘3d Builder’, or that have a legitimate purpose that I don’t need; like ‘Photos’ (as I use Adobe LightRoom)†.

With the help of this CNET article, I have been able to remove a good few items that will not be of any use to me!

END_OF_DOCUMENT_TOKEN_TO_BE_REPLACED

Although it apparently changed a few years ago, I was surprised to find out yesterday that ebay has changed it selling fees to include postage and packing charges! That seemed pretty harsh to me… but well they don’t charge basic listing fees any more, so…  However, after a little rash of recent sales I noticed that the final value fee had been charged on postage that the auction winner had actually collected in person!

Well, after getting ebay to ‘call be back’ I had a short and successful call in which they refunded me the small fee on postage as I described… and explained what I could do to prevent the problem recurring.

If a buyer collects from you, you need to ‘re-invoice‘ them inside of ebay. This will apparently provide options for refunding postage, and will also supposedly connect to Paypal and refund any amount if necessary.

Writing good error handling code is hard in any language, whether you have exception handling or not. When I’m thinking about what exception handling I need to implement in a given program, I first classify every exception I might catch into one of four buckets which I label fatal, boneheaded, vexing and exogenous.

Read Eric Lippert’s full post for ideas on classifying exception types for your circumstances, and thus whether or not you should attempt to handle such exceptions!

A key skill in my career, I think, has been to ask the question ‘Why?’ (and ‘What?’ and ‘How…?’) repeatedly — often when no-one is specifically asking me.

Sometimes this occurs without really wanting it to; I need to see the latest version of some code-base or other and so I start with an ‘Update’ to my checkout of their subbversion project.  And then I see it… END_OF_DOCUMENT_TOKEN_TO_BE_REPLACED

A software update remarkably seems to make a tool less able to do something that it seemed to handle well before?

I was recently strongly encouraged to apply a software update to my QuickBooks Pro 2014 software, for reasons of an important security update… yet afterwards I suddenly found out that the software I had successfully been using on Windows 10 for many months was suddenly incompatible?

END_OF_DOCUMENT_TOKEN_TO_BE_REPLACED

Seen this morning on BBC News during a story about ‘Punch and Judy’ shows: 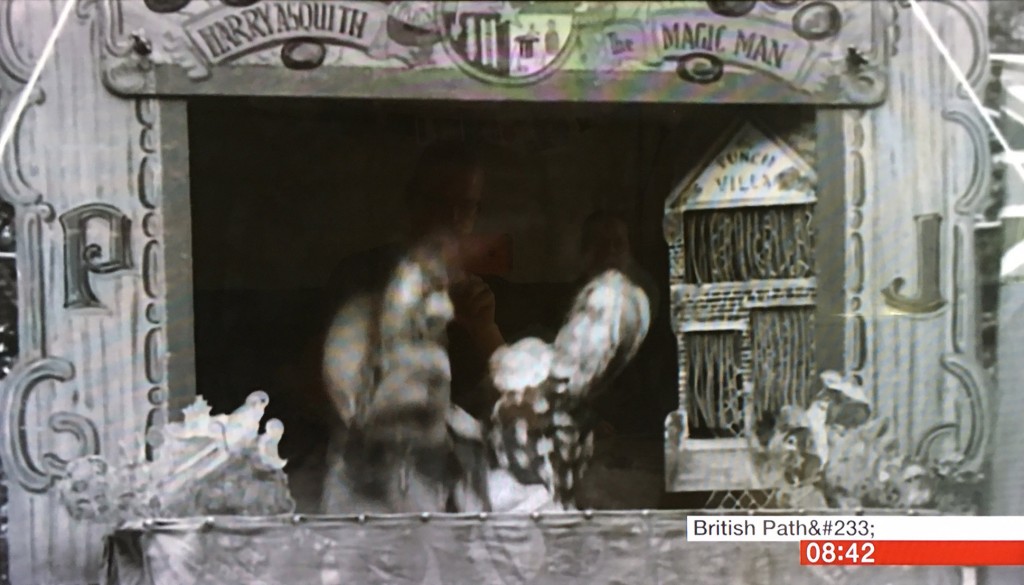 I’ve been meaning to write a review of Snagit for some time, but in advance of that, and having experienced some issues getting the Print Screen / PrintScreen / PrtScrn hotkey to work after setting up a new Windows 10 PC, I decided to blog what fixed the problem for me first.

In essence, the problem was that I could not allocate the Print Screen hot key to trigger Snagit Global capture, because every time I tried to set it, the program complained that the key was already in use by another Profile, or application.  These different messages were confusing, especially as it was easy enough to confirm that ‘Print Screen’ was not a selected shortcut for any of my Snagit profiles!  That left another application as the culprit.

I was fearful that OneNote might be the cause, but I could not find any options mentioning Print Screen, and lots of web searches mentioned Dropbox… but I knew that I had already de-selected the option! (For reference, Dropbox may grab the PrintScreen and Ctrl + PrintScreen hotkeys to support its ‘Share screenshots using Dropbox’ function) 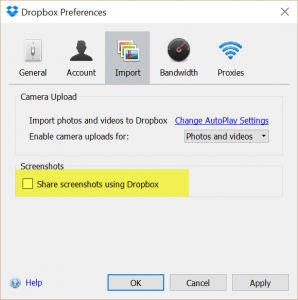 After much faffing, I found out that the problem seemed to be something to do with Dropbox retaining the hotkey allocation while it was running even if the option had been deselected!

The solution I found worked for me was to:

I hope this helps someone!

UPDATE 31/03/2016: Wouldn’t you know it, I had to reboot my PC overnight and after restart was once again greeted with a Snagit warning about a hotkey being in use by another profile! Turns out that Microsoft OneDrive had somehow nabbed it; I’m not sure how this is controlled… but when I pressed PrintScreen a OneDrive dialog appeared asking if I wanted to share my screenshots on my OneDrive. Answering ‘No Thanks’ seemed to free it up available for Snagit again. OK, I’ve found the Settings dialog, which like Dropbox is accessed from the Start Task Tray (normally at the right end of the Task Bar, near the clock): 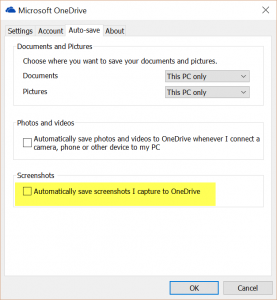