I’ve just been looking into the new Microsoft Office 2007 UI changes information here, and also the specifics for Word 2007 here. Oooh – Ahhhh – Doesn’t it look pretty?
Well, yes, it does, but it does not look like much of an improvement to me. And here’s why.

But, I should admit that my experience of the 2007 software is limited only to the online visual tours / demos. 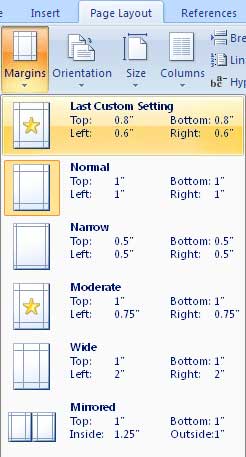 So back to Office 2007. The biggest UI change introduces ‘the ribbon’ ~ a mixture of toolbar and menu ~ so it seems that we have done away with traditional menus, and replaced them with this new ribbon. Also, the grouping of controls (in Word, at least) has changed to focus on the ‘things you need to do every day’. The intention is to make common tasks quicker. Yes right. The intention, let’s not forget, is to justify a whole new release of software that already did what most people needed from it anyway. OK, but I don’t really want to go there, so let’s get back on track.

Now, one of the touted improvements for Word 2007 is the speed and ease with which you can change the margins of a document. What? What? Are you mad? But dismissing the harrowing thoughts for the moment (panic not, we’ll come back to the loons at the marketing department shortly). Part of the presentation tells us that Office 2007 “simplifies and streamlines the work you do every day”, and then they choose to focus on changing document margins?

OK, breathe deeply, caaaaalm. So let’s look at this new process for changing document margins. The following table outlines the rough difference between Word 2000 and Word 2007 offered in this wild and wacky hunt for enhancements in Word:

Now, I am a cynic. But that just looks to me like they’ve just given us a set of default margin options (with pretty pictures, to be sure) that may, or may not, speed up the way that we do our work. It may be very obvious to you what my next cantankerous argument is going to be. Here’s my huffy retort (I have to imagine some of this, so please bear with me, because I have not actually used the beta software, just run the interactive demo).

You are editing your Word document, when suddenly, you feel a tingly feeling running up your spine. The hairs on the back of your neck and standing on end. A bead of sweat trickles down to your left eyebrow. Finally, your suspicions are realised as goose bumps form on your upper arms. Ominous clouds are rolling in, blotting out the sun. This is it, this is the time of day that you must, yes must, change your document margins. If you do not, you know the consequences so very well. You must change the margins on this document to 0.7″ on each side:

This sort of thing actually happened. Word 2000 and 2003 customers broke out in a sweat at all the margin-hacking key-strokes they had to complete. I know, because it is the only possible explanation for how customer focus groups can come up with such a need (just substitute back the 0.5inch margins we started with). And we haven’t even got to discussing why changing page margins might be a bad idea.

But Wait. I’ve just learnt how much easier it is to change margins, and now they’re telling me that “tasks you don’t perform so often, like changing margins, simply work better” (from the voice-over on the Office 2007 Visual Tour) . So wait a minute, out of all the topics you could have told me about that will improve my every-day use of Word, you’ve focused on one that I won’t have to perform that often? Now I’m really confused.

So once again, an ‘ease of use’ feature has been added to Word that actually occludes the control we had before. And being serious for one moment, perhaps having some presets available in the Page Layout dialog would have been nice – but they would be better there, in the dialog box, than in front of it, hiding the power and control we all so completely desire.

Many years ago I worked at a company that owned and operated a mainframe computer for a number of large clients. Each of these clients had extremely similar legal obligations to provide certain services to their customers. We had development teams focused on those services. We had an Accounting team, (and, OK, I’m going to tell you they were Local Authorities) and Housing, and Rates and so on. It wasn’t perfect, but all the specialist knowledge was concentrated in the area that it was needed. We had systems-analysts knowledgeable in the application work alongside programmers who had also built up a familiarity with the code, and possibly more. The biggest down-side to this arrangement was that individual members of the team sometimes had to speak to the customers. Blimey! Fancy paying an analyst to speak to customers instead of analyse!

Then, one fine day, a new Director flew in. Well, actually, I think he must have been flung out of a tumble dryer as his trousers were two inches too short, but never mind that. His disheveled clothing doubtlessly obscured a mind as sharp as – well, he probably got cuts just from thinking. Or something. Anyway, this new director looked at our sad existence occasionally speaking to customers and saw the light. “Systems Analysts and Programmers should not talk to customers!” he must have exclaimed to himself. Or maybe he had company, you know, someone taking notes or actually listening to him through choice. And so he put into action his cunning plans. A central support team was formed, not out of nowhere, you understand, but from poached members of each team. I don’t mean poached in the sense of boiled in water, of course, but whichever way, I don’t think too many people were happy with the experience.

You see, those teams were our little nests. We got on well (with the notable exception of one team where a couple of staff members so disliked one another that they built a wall of computer listings between their desks. I really am not kidding.) We became friends with people in our team. My team brought me a birthday cake once. It was nice. But then, the central support team came along and our teams were poached and battered and we lost staff. So, instead of occasionally dealing with third parties, we lost manpower and a little bit of specialist knowledge.

Fast-forward two years. Yes, that’s right, it’s the button with the two arrows pointing right but not pointing at a little vertical bar. Wooah! Not too far though. Now, where are we? The central support team has been struggling. So many problems, it turns out, require more than a little bit of systems knowledge. But now, a Housing user isn’t calling up a Housing specialist, they are calling someone who probably has Rates, or Accounting experience (though they are starting to forget all the details, it’s been so long). Now, even if the Housing specialist is in the room, they are on the phone to someone with a Rates question. Hmmmph. But they’re probably at lunch, or on holiday. Whatever. At some point, the support team will have to disturb the specialists that remained in their respective teams. It’s just not working overall! Yikes.

Summary: (all) the customers suddenly got to call just one phone number where they were now unable to get a comprehensive response to any question. If anyone owned a problem, it was the central support team member who, formerly an experienced member of an application team, was now relegated to chasing up colleagues across the company to check that support issues assigned to them were being worked on. Previously, of course, each customer had one phone number. It was just different contact for each customer.

I’m confident that the ‘Margins’ ribbon drop-down isn’t happy. Deep down, he knows he is a world leader pretend. But they’ve tied his hands and limited the options he can give to his customer. The Margins / Page Layout dialog isn’t happy either! She wants so much to be seen. To feel the loving caress of a mouse pointer on her UI. To demonstrate that she had control, she could do things for you! But this sad tale sees her languish, forgotten, behind the glitzy face of her colleague Raz Mataz esq in the ribbon. She hopes that some kind programmer has hidden an Easter Egg in her buttons, so that at least someone will visit, once in a while.

But of course it’s not like that really. Miss Forgotten never had the glamour she truly wanted. She was used, she was abused. Her looks were, to be frank, a little boring. But the thing that really stings, my god it really Hurts, is that she was never offered a change. So many people saying:

“Don’t change the company standard layout”, and
“Hey, shouldn’t we put that in the templates so we never, ever, have to do it again?” and
“I don’t like users mucking around with margins, they always faff around and make documents wider than the printers can manage”
and all those horrid things.

When all she longed for, was that beautiful word; “makeover”:

“Let’s give her some convenient default options, right next to the details options”
“Lets give her some chrome, baby”
“Hey, maybe we could give the margins effects like ‘sparkle’ and ‘marching red ants'”

I’m not sad to say it, but I know the dowdy margins dialog, she is necessary. But she can be evil. She is a temptress. She lures us into thinking thoughts like: “I could fit this all on one page if only the margins were a little smaller”. Crazy, despicable thoughts. Flagellate yourself if you have thought these things.

I’m really not that bothered by margins being changed. Honest. Even though it can have down-sides. But I think this demonstrates again the power of fixing the wrong problem. The problem, if there ever was one, was that the Margins dialog tab was a bit clunky. Worse, it was separated from the Layout tab where the Header and Footer area were defined (which confusingly seem to have the potential to override the top and bottom margins in any event). Here are just two intriguing oddities from Word 2003:

So now I’m mad. I used to think that the old dialog was just clunky. Now I know that the Margin – Header and footer relationship is ‘all wrong’ and doesn’t make any sense.

So perhaps that was part of the users’ problem before?

Looks like I’ll have to continue this one tomorrow…