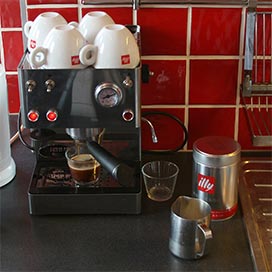 Today I’m going to write about my lovely coffee machine.

The model I chose is the Isomac Giada; not quite as pretty as a Francis Francis X1, but still quite nice to look at (and a whole bucket of coffee cheaper). I now see they’ve added an ‘X6’ to their range, which proudly boasts the addition of plastic to their materials, so they’re obviously going down-market 😉

Also in the running was the KitchenAid Artisan model, in a fantastic red that would have been great in my kitchen. I even considered a Gaggia Titanium beans-to-cup system, but for both, price and size were issues. The KitchenAid model has the advantage of being a twin-boiler design, which should mean you can froth milk at the same time as filtering the coffee, and the Gaggia model noted will grind the appropriate amount of beans for you, run the right amount of water through the system, handle the waste grounds, and so on.

But in the end, I picked the Isomac Giada because, at about one third to one quarter the price of the other models noted, I felt that a lot of beans, ground coffee, or kebabs could be bought with the money I ‘saved’. I use quotes there because I am aware that this is a luxury item and I wasn’t really saving any money at all.

Isomac also do a model with a built-in grinder, called the Brio, and whilst I was very tempted, I decided against it because:

In terms of other specifications, I have to admit that I can really only go on the blurb from the UK supplier I purchased from. However, the gist seems to be that the Isomac machines are made from real metal, and in particular the boilers and filter holder etc are copper, (the body is stainless steel). Certainly in my walk-rounds of the shops, some of the equivalently priced options have really light-weight filter holders which I can’t imagine hold heat very well.

You see, the biggest challenge to producing excellent coffee (in my experience) is that you need everything to be hot, to be sure that the coffee does not lose heat as it is being filtered. On the other hand, the maximum temperature of the water can not exceed a certain temperature, I believe it’s around 96 degrees celcius, because otherwise you burn the coffee… so this is not an area where you can just ‘boost the heat up’ if you wish to allow for heat leakage through the process. Therefore, having parts that hold heat is a virtue for a coffee machine.

Anyway, because I found the whole process of making my own coffee a little daunting at first, I present to you my recipe for a great mug of latte. Many of the instructions here are related to the precise operation of the Giada, so please be sure to ‘translate’ them to your machine. Needless to say, I take no responsibility for your ability to use your own coffee machine, according to its own instructions and safety precautions:

Wow – 16 steps to produce a coffee! Is it worth it?
Yes, most definitely (though I try to limit myself to 1 cup a day)!

This is a Sort-Of Tech Blog, So…

OK, now as this is sort-of meant to be a technology blog, you may like to take this opportunity to create a flowchart of the operations noted above. Now modify it for the ‘parallel processing’ that might be possible on a dual boiler machine, such as the KitchenAid Artisan (ooh ooh, they should remarket that the ‘KitchenAid Boiler 2 Duo’).
OK, maybe not.

I realise that the ideal cup of coffee will have been made from beans that have been ground within ‘the last few minutes’, but I am sceptical that any grinder I would purchase would be good enough not to waste a whole load of grounds just getting stuck in the container (and therefore coming out when you next grind some beans). Plus, I really don’t want to drink more coffee, but I do want to have the option of excellent coffee in my own home. I was also concerned to hear that coffee grinders are a world unto themselves, they can go wrong, and the grade of grinding that might be required may depend on the weather – literally! Humidity etc apparently effects the grinding process.

If you plan to make several cups every day, I would imagine that a dual-boiler machine would suit you better, and of course there are endless options on machines that know the right quantity of water to feed through the coffee, and so on. Though be warned, I just read a review of a ‘dual boiler’ machine that still did not allow you to be filtering coffee at the same time as steaming!

Thus far, I have been very happy with Illy ground coffee, though I would welcome recommendations for alternative UK supplies of ground coffee. In particular; is there a decent decaf option?

The Downsides with Owning your Own Machine

The biggest downside to owning your own machine is that you will realise that the coffee you get from the big chains is piss-poor as a rule. In fairness to the chains, you will probably also start to get an appreciation as to how much skill the production of a good coffee requires ~ I am sure there is way further to go than my simple setup… but on the other hand I really need to cut down on my various addictions, not take them to the next level. I can honestly say that it becomes something of an art-form!

For example (although this is something the chains will never have to worry about) it is quite a thrill to have poured the exact correct amount of milk into the jug, so that after it is frothed, you are pouring the very last drop of foam into your cup(s) to fill them to the brim. Yes, its a small victory, but a pleasing one nevertheless. And it goes some way to understanding the ‘art’ of the process, and the feel that you build up for it.

I reluctantly have to admit that my first *proper* Latte or Cappuchino was from Charbucks [Note 4], probably when I was about 25, and it got me hooked. Until that point, I simply did not understand why people would spend as much as £1.50 for a cup of coffee in a paper cup, and I would stick with the instant coffees. Yes £1.50! Hmmpf. So now we come to the downside, not only has Charbucks gone downhill massively in the intervening years (you need to get a double-shot to even taste the coffee, and I have experienced burnt coffee, burnt milk, coffees with no actual coffee in them, and so on), but even a ‘good’ Charbucks these days can not compare with my reasonably cheap setup described here. On the other hand, if I am in-town and I fancy a drink, I am far more likely to eschew a coffee in favour of waiting til I can get home to my own machine.

The Politics of Coffee

I’m told that in certain parts of Italy, they will not serve you a cappuchino or latte after a certain time of day… it is just not the ‘done thing’. If I recall correctly, those milky drinks are considered to be ‘morning’ drinks. Well, I’m a latte fan; whilst my coffee machine has produced the first espresso shot that I have ever enjoyed (buzz buzz), I still prefer the sweetness of the milk (even semi-skimmed) balancing the bitterness of the coffee. And my favourite time for a latte? After dinner. If the Japanese eat pizzas which are mostly fish based (no Hawaian or American / Pepperoni – what’s that about?), I reckon the English can pervert the Italian coffee ‘rules’ and suit our own tastes.

In February 2006, New Scientist had an article noting that it takes 20,000 litres of water to make 1kg of coffee. This could be a problem in many nations, because they are getting that water by pumping water from the ground, which in turn means that water-tables are lower for human consumption. In short, many countries face a looming water crisis as their annual rainfall is far below their consumption. For a taste of the article, the following letters cover some of the issues (though I am honestly rather concerned by the apparent satisfaction some respondents have in noting that the Earth as a whole is no worse off for water, I think it rather misses the point that certain countries will be DRY in a few decades):
First set of response letters
Second set of response letters

Some information from an extremist on milk preparation:
Too Much Coffee’s Mil Preparation Tips

And finally, a little guilt trip from BBC News (just compare the end-price to what the farmers get):
Why Cheap Beans don’t make Cheap Coffee