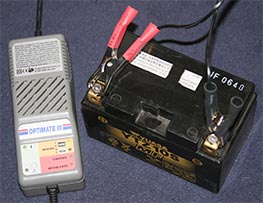 If you’ve ever read the book noted above (by Robert M. Pirsig) – or perhaps more accurately – if you have read and finished ZATAOMM, then you will know that it is more about a philosophy of values than it is about motorcycle maintenance.

As I recall, the first third of the book is rather tough going, but later on it becomes more interesting and understandable. A key word I remember from the book is ‘Quality’. In summary, a ‘Quality’ job is one that is completed in a way that it will last, “if a job is worth doing, it’s worth doing well”, and so on.

Today I find myself thinking a lot about Quality and Motorcycle Maintenance. I’m not much of a mechanic, but I do understand a certain amount of electrics and the real basics of how a bike works, even if I have never rebuilt one or even stripped one right down. But even with my limited knowledge, I have seen so many jobs, done by professionals, which have been so obviously ‘Wrong’ or ‘Bad’ to some extent that I can become quite disheartened by their idea of Quality.

Recently, my motorbike has been hesitant to start; hesitant in a way that suggested the battery could be the cause rather than mechanical issues. A few weeks ago, it failed to start altogether, and I had to recharge the battery overnight before I could get going once again. As batteries are expensive, I was reluctant to rush to replace it, and instead tried to pay more attention to it, and ride a little more frequently for longer journeys to help ensure that it stayed charged-up. Today, it has happened again… a frustration at any time but somehow it just seems more embarrassing and annoying when you’re standing in your full bike gear on a main road with the bike refusing to even turn-over – not to mention hoping to go somewhere!

Now, because I don’t have a driveway or any place to park near enough to a power outlet in my flat, I have to remove the battery to recharge it in my home. The last time I did this, I noticed a couple of extra connectors on the positive terminal, and when I had to remove the battery again today, I decided to take the opportunity to investigate those wires a little bit further. I expected that they might have been connecting to the alarm, but was surprised to find that they actually led to what appeared to be a battery charging connector, similar to something like an Optimate 3 (a motorcycle battery charger) but smaller. But wait! Both terminals were connected to the positive terminal? Yes… really, they were… and to clarify a little in case you are not familiar with electrics, one should have been connected to the positive terminal, and one to the negative.

Now, what I expect happened is this; the last owner had a garage and fitted the charging connector so he could keep his bike-battery conditioned (topped up using a charger)… but I know that when I bought this bike, the showroom had to fit a new battery. Well, I was told it was ‘new’ anyway (one only realises in hindsight the ambiguity of that word). So, they fitted this new battery and in the process, somehow decided that they would connect both of the wires to the same battery terminal, even though one was marked red (traditionally representing positive) and one was blue (traditionally, negative). God knows how or why that happened, but the original fitter surely can’t have made this mistake, as most battery chargers have ways of detecting incorrect connections to the battery.

Of course, when I recently charged that battery the first time, I removed the wires from the terminals, and replaced them on the same terminals when I reinstalled the battery; it was dark and I was working by the light of sodium street lamps, so colour-coding was not something I was going to be able to see at that time. And today, fortunately in daylight, a few moments of investigation uncovered someone’s prior stupidity… or lack of Quality.

So, as I waited for my battery to recharge, I started to ring-around to look for a bike shop that could quote a price for the appropriate battery, and could tell me when they could get it in stock. The first shop gave me a vague price because the chap who answered my call “didn’t normally do spares” and he couldn’t find the exact part number. No offer of a call-back from someone who could say for sure; no Quality of customer service… no Sale. The second place I rang I had far more of a conversation; they helpfully explained to me that the type of battery I need is gel-filled which actually means they do not need to be charged up (unlike the ones you need to fill with acid). And, after a quick chat about part numbers, it seems that they think the battery that was fitted to my bike is probably the wrong model anyway! Plus, they had a couple in stock so I could collect it at any time. Quality = Sale.

And so I now have another reason to look back to the dealer I bought my bike from and consider them to be lacking in Quality.

However, I know better than to entirely trust the words of competing bike shops, especially when they are talking about each other. My Honda manual, unfortunately, does not provide a specific part number for the battery. In itself, this is unusual because my recollection is that bike manuals tend to specify brands and part numbers for oil, tyres, etc; and the net result of this is that I have no independent authority to check at this time.

Back to Software Development

Heading back towards thoughts of software development, my bike’s wiring loom is suffering from entropy. Past changes include:

Most of us have heard that entropy (chaos) increases in software systems as changes are made on top of changes… but I am not sure it is commonly remembered that Low-Quality changes increase entropy more quickly than quality ones. The recharger cable on my bike was the equivalent of a commented-out piece of code without an explanation of why it was no longer needed – or perhaps a better analogy is that the code was not commented out but was somehow no longer reachable. The brake-light cable that now goes nowhere is similar.

If these mistakes can be made in extremely simple subsystems of a motorbike, how much easier must it be for entropy to increase in software?