…or “How to improve your appalling ADSL speeds to what they told you you’d get speeds”
…or “How I split my ADSL and telephone signals and shoved them down a Cat5e cable”.

Update 18/03/2015: This post mentions site clarity.it which has since changed its name to www.claritybroadband.co.uk – HOWEVER, the last time I attempted to order from them in Summer 2014 I had absolutely no response after several weeks and ended up having to reclaim funds from Paypal. For that reason, I have decided to remove the link to clarity in the text below, but the rest of the text may still be of interest.

OK. So this post is not about a blag or any mechanism whereby you can get more speed than you paid for. It probably only applied to people with a lot of pre-existing phone cable in their home, and it will probably only help people who have a reasonable interest in wiring and so on.

My previous ADSL service was supposedly capped at around 4Mb/s – because I consistently saw speeds lower than that on BroadbandSpeedChecker and similar sites. It so consistently hung around 3Mb/s that I assumed that they were actually capping me lower than the paid-for speed; and as this service was the basis of a television service too, I would often see extremely poor connection speeds if anyone was watching TV. Various research showed that the service in my area ought to have a physical limit of about 13Mb/s*, so I felt I ought to be able to get my paid-for 4Mb/s easily. For various reasons, I decided to move to get Sky TV as a TV supplier, and O2 as an ADSL supplier, with speeds ‘up to’ 20Mb/s – but with ‘expected speeds in my area’ of 13Mb/s.

Skipping briskly past the cock-up on the day of transfer that left me with no phone line** (but thankfully I did get my new ADSL by the end of the day) I was shocked to find that my broadband speed had actually lowered to about 2.5Mb/s. How was it possible that a faster service could end up slower than the previous service?

Lots of research later, and frankly loads of tests, showed me that if I plugged my ADSL router into the ‘test’ socket I could indeed achieve connection speeds around 13Mb/s… but as soon as I connected in the face-plate (to which my phone lines for the rest of the flat were attached) speeds dropped horrifically. Bluntly, the phone lines under the floor in my flat were the problem.

Note: The master socket in your home generally marks the point at which the wiring owned by BT from the exchange becomes yours and your responsibility. You are apparently allowed to modify wiring connected to the face-plate (and the face-plate itself) but you are not allowed to change the back-box or any wiring in the back-box.

Now, many people in this situation would be able to make do with a wireless router and wireless phones and voilà, you are done. But for various reasons, my phone line comes into the kitchen at the back of the flat and it would have been inconvenient to have a phone base-station and router there.

My first test was to get a new phone-line extension kit, cut out the existing under-floor wiring, and just string out the 15m of new cable extension to the hall and retest with the ADSL router there. Connection speeds were about 10Mb/s, which I felt was tolerable, and it proved that there was nothing wrong in concept with having phone extensions, it was just the wire under the floor that was the problem. But, before I made a permanent wiring to the hall, I researched my options, and thanks to the excellent site at clarity.it, I decided to try and wire my extension with a pre-filtered ADSL signal, and to run the extension with the phone signal and the ADSL signal through a single cat5e cable.

Here’s what I bought:

Here’s the deal; by using a pre-filtered face-plate, we are saving ourselves the bother of having filters on every phone socket around the house. We literally split off the ‘unfiltered’ ADSL signal onto two wires, and the ‘filtered’ phone signal onto two (or potentially four) wires. And hopefully, the one centralised filter is a better quality than the usual ones.

At the face-plate end, we strip outer sleeve of the Cat5e cable and fix the wires as follows:

It’s sensible to use the blue pair in the noted configuration, because this is roughly the same standard as BT wiring#. The wires to pins A and B could actually be any colour, but I chose green. The other four wires (brown and orange pairs) were cut short (though both images to the right show them uncut). 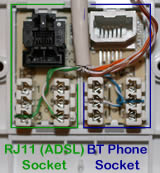 At the other end of the cable, I connected the BT phone socket as follows (note how I have left as much wire twisted as possible):

and the RJ11 socket:

After testing with the router plugged into the new RJ11 socket, I found my ADSL box was connecting at over 13Mb/s… which was a 2-3Mb improvement over the normal phone line extension, for twice the length of wire.

I then started the whole process again as I had to thread the cable through a couple of walls and fix it in place (but this was a lot more preferable than fixing it in place and finding it offered no advantage!)

It was of course a pain that my pre-existing wires could not handle ADSL signals very well, and personally I would prefer the cables to have been hidden… but from a signal noise perspective, I am confident that the use of the Cat5e cable and (what I hope are) high quality components that I have squeezed just about everything out of the ADSL signal that is currently possible. Additionally, routing the cables above floor-level means they actually get manhandled less; below the floor even these components may have suffered as they would have been nearer electric cables, and had to be pulled-through literally tens of joists. This could have damaged the cable, and the proximity to power and other services could have interfered with the ADSL signal more. In contrast, the cable route above the floor allowed for feeding through just two walls and well away from other signals.

* ADSL relies on copper wires being used for your phone line from the exchange, and the maximum speed possible depends heavily on your distance from the exchange. As I was less than a mile from the exchange, I hoped to be able to have an ‘expected’ speed of around 17-18Mb/s, but as it was 13 was the very best number that was estimated by various sites. It should also be noted that most of the actual speeds shown on this page are retrieved from the router, not Broadbandspeedchecker; the speed that your router connects to the exchange will always be higher than the speed you see on speed-test sites (another factor that I had not fully taken into account)

** BT support were adamant that this was not related to the ADSL switch-over and that I had to be available to have an engineer visit. Sure enough the engineer did find that they had screwed up at the exchange; but overall it was worthwhile, as he fitted my historic master socket with a new NTE5 version (which was fundamental to the above process) and wired me into a new phone line back to the exchange. All-in, it was a very worthwhile visit considering the desire for faster ADSL!

*** Although the clarity.it site and others will tell you that an RJ45 socket can be used to accept an RJ11 plug, I tried it and was not impressed by how much the plug could wobble. I decided to go for the proper RJ11 outlet to help distinguish it.

# So, for example, Sky had wired in a new phone extension during my Sky installation, and this had to be disconnected (which is technically against their T&C) during all this testing. I was able to strip the plug on their extension cable, and hard wire their phone extension into this new face-plate too; Blue/White wire onto pin 2, White and Blue onto pin 5.

18/03/2015 Reminder: Due to issues experienced since this post with the website clarity.it, I recommend caution before placing an order.