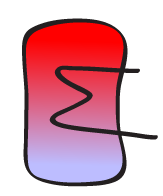 There is an apocryphal tale that goes something like: A man has a problem with his boiler that continues for months and causes him no end of bother. Finally, an expert comes to see the boiler, and the expert taps the case a few times, tweaks a fitting… and then charges the man a large sum of money. The customer is surprised and exclaims: “But you only did 2 minutes of work!”, to which the expert replies: “You are not just paying me for my time today, but the ten yeas of experience that I have!”

And now to the point of my post. We moved a few months ago, and have found that the boiler stops working intermittently. It’s easy enough to reset: there is a little button under the boiler that pops out, and can be pressed back in to fire it back to life… but needless to say if the problem occurs when we are out, we could come home to a very cold house. We had one guy come to look at our heating system in general, and he saw the problem occur, and suggested that the pump may be on its way out due to its age. Honestly, I was surprised at that assessment as there was no dust or obvious signs of age on the pump, but as he was not there specifically to look at the issue, there was no need for me to question it in particular.

As time passed, I was able to understand the problem a little bit more. The boiler-cutout was switching the boiler off after it had already been turned off! That is to say, I might see the boiler flames running, then hear the room thermostat turn off; the boiler flames switching off immediately. Then, after a couple of minutes of quiet, I would hear a pronounced ‘click’ and find that the cutout had operated.

I could now use what I had learnt to make the problem reproducible; a key step in IT support to ensure you understand the problem. Steps are as follows (I shall only discuss Central Heating controls and ignore options for Water heating, assuming that option is off):

What would cause the boiler to overheat after it had turned off? It turns out that when a boiler is running, it requires the pump to be running to move the water around the system, and even when it switches off, lack of movement of the water can allow heat to ‘sit’ in the boiler instead of being carried away. Hence, triggering of the cutout a couple of minutes after the flame has been turned off suggests an issue with the pump, perhaps. Except the pump seems very reliable at other times, and if it was so poor at shifting the water round the system, why would it not switch off at random times when the flame was on, simply because not enough heat was being taken away from the boiler at the time?

Fortunately, I had just replaced the old and broken boiler programmer (being very careful to replace wires in the equivalent locations that they had been before) and I had come to the conclusion that the pump was being switched on and off by the controller. If the boiler was switched off, then the pump was switched off too. So… there was a problem with the wiring, perhaps, rather than the pump? Well yes; it turns out that the pump should not have been wired directly to the controller; it should have been wired to be driven from the boiler – a Potterton Profile 80e which shows in its installation instructions that the pump should be wired into it. This would mean that when the boiler was switched off, it could ‘choose’ to continue to run the pump if it wanted; this is pump ‘over-run’ and is quite frequently required for boiler installations, it seems. So the solution is to rewire the boiler correctly; give it power at all times to the appropriate points, and give it ‘switched power’ when the controller wants to turn the boiler on… and then wire the pump into the boiler pump connections; the boiler then controls how long it needs the pump on for.

However, there is a problem. It turns out that the heating system in our new home has pipework in an arrangement known as ‘S Plan’; which means that there are two 2-port valves; one for each of the central-heating and the hot-water. When the boiler is turned off by the controller, both of these valves will be closed; so if the pump were to continue running, the water would have nowhere to flow, and thus would indeed cause problems with the pump or other pipework possibly. There are two options:

It seems likely that there is no radiator in the house that has been plumbed-in as an always-on radiator, and there is no automatic bypass valve apparent in the pipework. As a result, it would seem likely that the fix should include some changes to pipework; and that change is likely to be fitting an automatic bypass valve, and then rewiring the boiler and pump. Plumbing in a bypass valve is more costly in parts, probably, but should be easier inasmuch as the changes are all possible in the current airing cupboard; whereas replumbing a radiator would likely involve extensive work under expensive fixed floors.

I’m not sure if we will do this work as it is likely that we will be doing a major overhaul of our central heating an water system in the next year; but I am certainly tempted to try just to see if it does indeed solve the problem. Not doing it may cause problems, as the overheat situations are probably causing some degradation to the boiler itself over time. We’re not planning to keep it long-term, but do not want major repairs before then.

And so, finally, we can return to the question of the expert. I do not deny that an expert could probably have identified the underlying causes of the issue in minutes had they been present. They may have seen warning signs; like the pump wiring running from the heating programmer and not the pump (though not all boilers require pump overruns, it seems); perhaps too they would have noticed the lack of an auto-bypass. Nevertheless; which expert you get through your door is open to some degree of variance, and perhaps an expert in a different kind of boiler would not spot the potential issues with the configuration of this one. And as for the experts who plumbed-in the boiler and controller originally, some 15 or so years ago? Well, I doubt that they were experts at all.

Before signing-off from this long post, I have come up with a way to clear the lockout quickly if and when I find it has done so. When the system has just been locked-out, you will find it difficult or impossible to push the button back in. This is because there is still too much heat in the boiler. How can we cool the boiler down? Well, as we saw above, the problem is caused by the room thermostat or timer / programmer switching in such a way as to cause the boiler to switch off at a point in time when it was burning gas. It seems that for me, with my boiler and plumbing and wiring, the solution is as follows:

# The alternative is ‘Y-plan’ where there is one three-port motorised valve, which has the pipes arrange in a ‘T’ shape. This system does not present the same problems as ‘S-plan’, as one of the outputs is always open.

* There is a non-automatic bypass; a gate-valve that I can open and close; but there is a problem here too. If I open it, it seems that the boiler it less likely to have this thermal-shutdown… but there is a reason for this and a large down-side. As a short-cut between the flow and return, when the bypass valve is open it offers the easiest path for the water to flow. This means that water is slightly more likely to flow through that pipe than the radiators (or hot water tank); it will therefore return to the boiler hotter, and so the boiler will switch off sooner because it wants the water to be cooler before it turns on again. Note that this time, when it is the boiler that decides not to run because of the temperature of the water in the system, the pump etc will still be running (as long as the programmer and room thermostats are telling it to). The net result is that the boiler is far less likely to warm the house, far less likely to bring the house to a point where the room thermostat switches off, and also far less likely to actually be on when the programmer switches off. In summary, opening the bypass reduces the risk of thermal cutout, but also reduces the heating capability of your boiler and central heating considerably – or at least this is the case in my experience.