Have you ever changed something in your home and at work, expecting life or work to be much better afterwards, and then found yourself on a path of being forced to make several other changes – just to get the promised improvements to actually work, or to get back old functionality that mysteriously disappeared?

I have certainly experienced this myself on many occasions; but today I want to talk about one specific instance following an upgrade to new large monitors; I recently bought new monitors that support a higher resolution than I have ever used before: WQHD or 2560 x 1440. 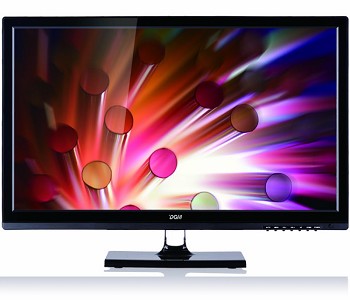 The graphics card I had only had one Dual-Link DVI port on it, the technology I had previously used and had most cables for… so one monitor had to be connected to a spare Mini DisplayPort (DP) socket, for which a converter to DisplayPort socket had been supplied.  This worked fine, but I had always understood that my main monitor, using the DVI cable, would be best changed to DP cabling to improve the quality.  I had a standard DP cable (with male DP connections at both ends) so as soon as I had purchased a DP to Mini DP converter, I reconnected the main monitor to use that.

Unfortunately, I started experiencing a problem with the primary screen intermittently going black for a second or two, and then coming back. The process was quick enough that I had almost no time to do anything about it before it worked again, but slow enough that if I was in the middle of typing something or using the mouse on that screen, it was intensely frustrating waiting for the display to return.  I could notionally have returned back to my old cabling setup – but this would probably have felt like failure, and I had been very careful to chase the cable through monitor arms and this included using cable-ties to keep the cable out-of-site.

After a bit of research, I found out that this sort of problem has been a big issue on the Mac, but I was using a PC, which seemed to have fewer incidences of these issues.  My best guess was that it was the new DP to Mini DP converter, which always seemed rather loose to me; and none of the plugs on the cable had any kind of locking mechanism (I suspect they were the cheapest cables possible).

On a couple of occasions I searched for alternatives, but in general DP cables are considerably less available than HDMI, DVI or even ancient VGA cables; so I failed a couple of times; but finally in the last couple of weeks I found that Amazon hold a StarTech.com Mini DisplayPort to DisplayPort Adapter cable – I bought the 10ft (approx 3m) version. 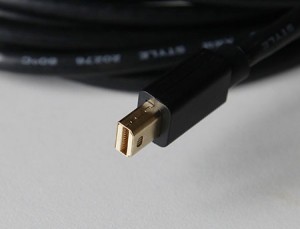 Since replacing this cable with the previous one I had. I found that the locking pins on the main plug certainly seemed to make a better connection at the monitor, and at the computer end the Mini DP plug went in to the graphics card well enough, though I still do not have great confidence that it would stay in if, say, the weight of the cable was putting any pressure on the connection. Fortunately this is not a problem for me at this time as I have a number of cable tidies behind the computer to ‘hang’ spare cable on.

My initial impression of the impact of this change has been remarkably positive.  The problem has not recurred at all, and I have been using the computer for several hours each day.

While I am thankful that I now have my monitor back working properly, it is a shame I had to jump through such hoops.

I am now intrigued regarding the specifications of the DisplayPort standard. Did the standard neglect to require a locking mechanism, and thus lead to the possibility of a cable with loose connections? Or was the cable I previously had actually below-standard?  As ever, the wikipedia article on DisplayPort is fascinating, but quick to get to technical details I do not really understand, and if the issue was manufacturing tolerances I am not able to tell if my cable met the standard!

It would be a shame if the problems I experienced were due to poor connections between components that had been manufactured to standard. I find it intriguing that some cable standards, such as eSata, have specified locking plugs and sockets, and older display connectors had very substantial screw connections, yet HDMI and DP have seemingly been specified not to require locking.

Ultimately, we have to rely on the standards bodies – in this case VESA – to specify modern systems with broad improvements over what came before… and broadly it looks like DP will be incredibly useful with being able to send many types of signal over a single cable. However, sometimes improvements can be relative, and an improvement in one area might compromise performance in another.

I’m sure that DisplayPort is ‘the future’ for a good few years to come, but I won’t be buying converter plugs again for a while!

Just after posting I found a website for Molex that seems to offer electronics components for DP cables and so on.  It says:

Molex, in accordance to requirements outlined by VESA, has developed the external DisplayPort* Interconnect System solution. It consists of a 20-circuit, 0.50mm pitch SMT, external receptacles designed with a polarized D-shape mating interface and metal shield for full EMI/RFI protection. In addition, the connectors are designed with four solder pins for added mechanical stability and robustness, as well as a snap-in plastic peg for positive polarization during connector mounting. The receptacle is to be mounted on the device side and the plug, which is overmolded at both ends of the cable assemblies, on the display device. The cable assemblies come in both latching and non-latching versions.

The last sentence “come in both latching and non-latching versions” appears to imply that a latching / locking mechanism is specified but not required by the standard.