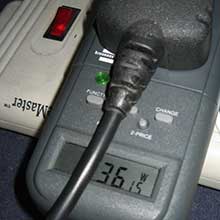 My electricity bills recently have been horrendous. My bills being high were not a surprise when I was running computers for a business; it was a business cost, and I had made a commercial decision to run them 24/7.

The commercial decision was based on the (admittedly rare) unreliability of our broadband connection… not particularly the start-up time of the machines. I wanted to be sure that we captured as many emails relating to orders overnight as possible, in case we could not access the internet the following morning. If we went without the internet for a whole day, we still would not have quite enough information to complete the orders, but if we had the emails we would at least be able to progress all the administrative tasks involved in sending out exciting things like – bottles of ink and paper. I know, my business was exciting!

Anyway, for quite a while I didn’t change my approach to switching the computers off each night, but as electricity prices crept up and up, it became far harder to ignore. Additionally, I’ve been feeling a little bit skint, so dealing with it moved right up the priority list.

There were going to be two main approaches to saving electricity, one was the ‘simple’ way of just start switching everything off (that was sane to) as a rule. But, I don’t like the vague approach, and I wanted a better idea of which items were going to be the key ones to concentrate on; after all, How Much Electricity Does My XXXXXXXXX Use? (insert whichever item you choose).

With the computers, I thought that the way to do this was to find out exactly what hardware I had in the box, find the tech specs for each part, and sum the power consumptions; but that would not tell me an ‘average’ consumption, and possibly an unrealistic one at that. I really wanted to find out how much my TV consumes on standby – I don’t tend to leave it on standby, but with all the stuff we hear these days about it, I was interested to find out.

I started a search for some sort of power-meter that I could plug into a standard wall socket, plug a device into it, and it would tell me how much power the device used over time. Let me save you some bother… the correct search term to use is ‘Power Meter’ (possibly with ‘residential’ added on. In the USA, it seems a particular brand name for this type of device is ‘Kill-a-watt’. No such thing in the UK, but a Google.co.uk or ebay search with the term will probably get you something appropriate. I went for a Brennenstuhl PM230 Electricity Meter (for UK sockets), and it cost about £20.

I won’t go into the detail of what this device is capable of, but suffice to say it can show the current power usage (in Watts) and it can also track electricity usage over time (in kilowatt hours – kWh). It should also be noted that whilst the technical specifications allow for an accuracy of “+/-5% of measured value +/-10 Watts” for the wattage display (which is particularly significant if the measurement is less than 10Watts!), I did find the measurements repeatable for the majority of appliances and devices I tried it with.

I’d best just point out that some devices have power switches that physically switch off the power. If the switch is ‘off’, electricity physically can not flow past the switch, I refer to these devices as ‘hard-switched’ – the switches act in an equivalent manner to switches on the wall socket, and are almost the equivalent of unplugging the device from the wall.

Then, there are ‘soft-switched’ devices. These devices have some-sort of power switch, but in truth that switch is not directly connected to the power cable, but indirectly via some other electronic switch mechanism. I have a small stereo in my kitchen which is like this; I can turn it on by remote control or pressing the power button. In general, anything which shows some kind of power light, even when ‘off’ will be soft-switched.

Finally, there are devices which do not have any kind of switch at all; phone chargers are classic examples of this. If I remember my physics rightly, looking at the wiring for a transformer would suggest that electricity would flow freely between the live and neutral power lines. However, when no power is consumed from the secondary turnings of the transformer, something called Back-EMF comes into play which actually chokes the flow of electrons through the primary windings. I guess the details are not important, the summary is, a transformer will waste energy if it is not switched off at the mains or with a hard-switch (but it is not so much as if Back-EMF did not exist).

Cut to the Chase

But I did find many devices that did have electricity readings… even when they were ‘off’ (though as defined above, they were obviously ‘soft-switched’ devices:

I personally believe that the most significant of these figures are those for the computers; that 37 Watts equates to a running cost per year of around £23, for each of three computers… that’s before I’ve even switched them on! Now that is crap. Those Altec Lansing speakers are pretty poor too, costing about £13 a year, before even using them.

Well, I guess the most obvious lesson to learn is that, whilst you will almost certainly benefit personally (and benefit the environment), by unplugging your phone chargers and keeping your TV off standby, the savings you will make by doing this could be undone if you leave your computer plugged in (even if it is ‘off’). Or maybe your stereo system, or speakers.

The thing I find most puzzling is that whilst 3 of 4 of my computers are using over 30 Watts when off, the other one shows no power consumption most of the time, and occasionally flicks up to about 7 Watts for about a second. Over an extended period of time, it seems like the average power usage is 0.007 Watts. Why can one transformer (granted, one for a laptop) need so much less power than another?

In the meantime, I am switching off (at the plug) all of my computers and screens when not in use, my microwave and oven, that minidisk player… and a good few other devices.

* Remember that just because the power meter did not show any power consumption when the TV was on standby (or phones were being charged) did not mean that they were not using power, they were. It was just that the power being consumed by those devices was too low for this particular power meter to measure.

New page for the Manual Scans

I have now added a page with the scans of the PM230 instructions.