Today I wanted to report on my latest experiment; using a dishwasher to help me clean a Microsoft Comfort Curve Keyboard 2000.  There are many posts on the internet about this, and after some research, I decided to give it a try, as I had just inherited my keyboard from work.

First decision was; How much should I dismantle the keyboard?  Some people have tried running the whole keyboard through the dishwasher, but this typically seems to be followed by letting it dry for days afterwards, and involves some risk because the electronics get wet.  Some suggest stripping the electronics out of the keyboard, and washing all the rest.  I decided to prise off the key-tops and dishwash those, but leave the main frame safe and dry.

Before removing any keys, make sure that you take a photo or have access to a reference to be sure you know where to put each key back!  On the whoe there are few surpsises, but things like the cursor keys would be a little easier with a reference photo.

I found that the carefully pulling on the top of the keys on this keyboard tended to have the best results in terms of getting the keys to pop off.  It was a little bit like playing tiddly-winks.  I used a letter-opener to get under the keys as much as possible before prising them up, and on-the-whole this worked fine; it was a little thicker than a typical cutlery knife, but a knife would probably have done the job just fine. 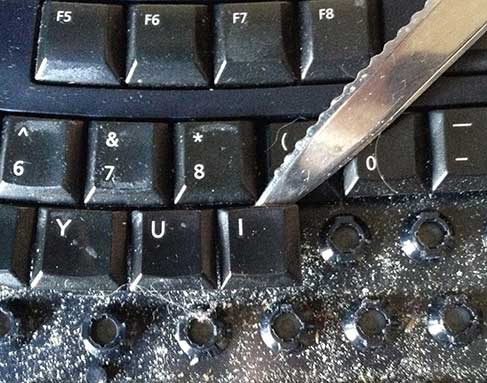 Using a Letter Opener to Remove the Keys. There is an incredible amount of dust behind the keys despite frequent ‘shakes’ of the keyboard before this process.

I used a vacuum cleaner and brush attachment to get rid of the majority of the dust under the keys, and standard keyboard cleaner and tissues to clean the rest of the frame.

The keyboard base and small metal bits were kept separately, and did not go into the dishwasher. I chose to wash the keys in a porous bag intended for use washing small items in a washing machine, and placed it as spread-out as possible on the top rack.  I washed it on the lowest temperature setting, and did use dishwasher soap. A number of sites suggested a normal dishwasher drying cycle might be too aggressive, and fearing that it could melt the transfers on the keys I took it out about half-way-through the drying cycle.  I laid the keys out on a drying-towel to air-dry. 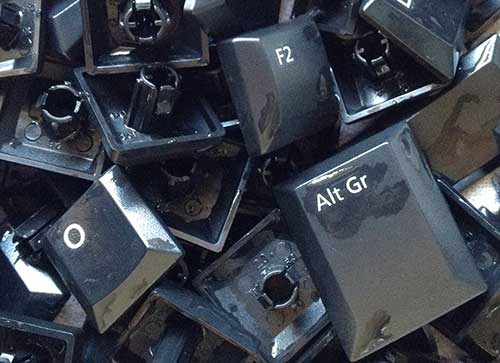 Keys from the dishwasher – before the drying cycle was complete

Once the keys had dried completely the process of returning them could start. Most keys simply click back into place, though some take a little joggling and reseating to get a key that presses up-and-down cleanly and without sticking.

As noted previously, the larger keys had little metal bars on the back of them. Refit them as follows: 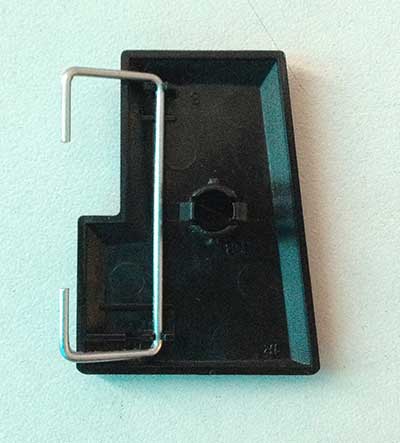 Before refitting, some keys need to have little metal support bars refitted

Now – I contemplated adding grease to the ‘arms’ and ‘hinges’ on the bars – but as it did not appear to be a problem not to do it, I left them clean to start with. 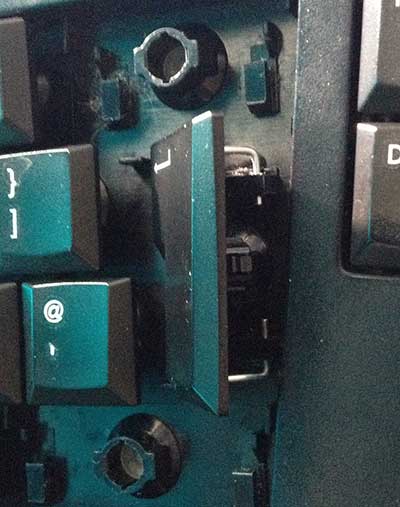 Slide the metal support into the runners before rotating the key and pushing back into place.

As with any other key, the buttons should press in and release cleanly after refitting.

By this stage the keyboard should be looking pretty much normal again (but cleaner) – I think this photo emphasises even the tiniest bit of dust unfairly – but I can assure you that the areas between keys are essentially spotless, which they definitely weren’t before: 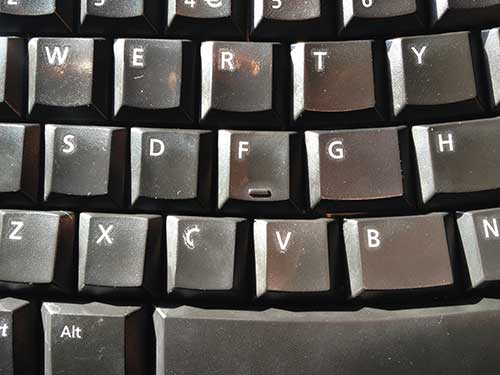 The finished keys. The C key was already losing its transfer before the wash.

Once all the keys were refitted, it only remained to test the keyboard.  The problem with just relying on typing and using the keys is that some keys are less used than others.  I found the test software at KeyboardTester.com worked pretty cleanly – though it did not quite cover the 102 + extra keys on the keyboard; and some keys are indistinguishable in code.

The end results were pretty good in terms of cleanliness.  The dishwasher did not appear to harm the keys over and above the wear and tear that already existed.  I would say that I may need to try and reseat a couple of keys, as they are slightly more resistant than previously.  The Backspace key especially seems to be less responsive, but nothing to get too panicked about at this stage.  I’ll give myself a bit more opportunity to use the keyboard, and report back 🙂